Seems God has a thing about rocks. They aren’t specifically mentioned in creation, but they show up literally and figuratively most everywhere else in the Bible. When Moses needed water, he struck the most unlikely source, a stone. When Jesus was reaching for a metaphor to describe his hopes for the fisherman he called to found the church, He called him Peter, which means rock. Not surprisingly, God gets referred to as one of those rather often. To the psalmists, He is the everlasting rock, rock of strength, and the rock of our salvation. Blessed be the rock indeed. When our feet are in the miry clay, he puts them on the solid rock on where we can sing and stand. And when our souls need hiding and protecting, the cleft of the rock is where He hides us, a powerful hymn and image plucked right from the headlines of the prophet Isaiah.

So amid the ashes of the Wednesday that signs the beginning of Lent, all those assembled did not go home empty-handed. We gave them – you guessed it – a rock. Large enough not to be easily lost, but small enough to carry without encumbrance. We marked heads and hands and sent people out to leave the less-enlightened the chance to ask what the mark means. The cashier at Publix told me one person offered her a wipe to clean off the smudge. Call it ignorance, or as I’d rather, a chance to tell the story. At least part of it. 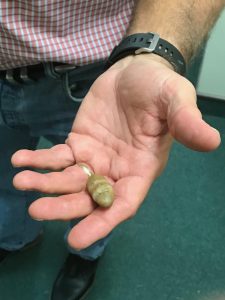 We asked each person to keep their rock and promise every day to pick it up and put it down. Last night it came out of my pocket onto my dresser. This morning, it found its way into the jeans I chose to wear to the office. The “laying down” reminds us of the tradition of giving something up for Lent. Not to punish ourselves, but to remind us of the Christ, whose very nature was to routinely sacrifice. The “picking up” suggests a different approach to the season – doing something you don’t normally do, but probably should. Last year Lisa wrote a thank you card to someone every day of Lent. Others carve out a few minutes to read, reflect, and pray or maybe call a friend. Take on a new challenge. You get the idea.

We Baptists have been slow to the table, so to speak, when it comes to this practice. Beginning with palm ashes and walking slowly toward the open tomb is a great Christian practice not exclusively held by a particular brand of believers. But I hope you will join me there, even if you didn’t receive yesterday’s smudge to remind you of sin and mortality, not popular topics in culturally convenient Christianity. Think of something to turn loose of – social media, a favorite food or beverage, TV news. The possibilities are as endless as the blessings promised. Then pick something up. Easter and all its godly giddy glory will be here soon enough. And it will mean more when we understand that the victory is won over the only two real enemies we have: sin and death.

As our folks lined up for a blessing and the imposition of a dusty cross, I said these words, “Because we have sinned, and because we have died, we place our trust in the One who has not and will not.” And then I pointed them toward our sister Sara and suggested that while they were up here they may as well get a rock. Pick it up. Lay it down. Remember what it means. Nothing magic, but helpful tools for finding a full-faith life marked by significant seasons. It is, after all, the way of the cross that leads home, and it is on Christ the solid rock we stand. Let us sit and simmer in the truths we love to sing. For Easter to mean much, we have to remember why it is we need it. Again I say sin and death. And Lent does serve to light our journey towards the cross. I look forward to walking it with you.